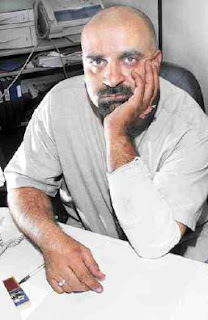 A group representing Canadian journalists has condemned an attack on a Pakistani reporter in Mississauga.

Two men, one armed with a cricket bat, smashed the car windows and beat Faizi before they fled the scene.

Two men threatened him and said that he should stop writing against Islam, and against the Pakistan-based religious organisation, Idara Minhaj-ul-Quran and its leader, Cleric Allama Tahir-Ul-Qadri, Faizi said in an interview.

Allama Tahir-Ul-Qadri is a frequent visitor to Canada. Both Arain and Faizi say they have received telephone death threats.On Monday they filed a complaint with police.

"That this attack happened here in Canada is of great concern to us," said CJFE Executive Director Anne Game. "We call on the police to treat this matter extremely seriously and ensure that a full investigation into the attack is initiated immediately.

Faizi told CJFE he had many problems as a journalist back home in Lahore, Pakistan but was shocked at the attack in Canada.

Canadian Journalists for Free Expression (CJFE) is an association of more than 300 journalists, editors, publishers, producers, students and others who work to promote and defend free expression and press freedom in Canada and around the world.

A total of 16 journalists were physically attacked, mainly by lawyers, while covering a demonstration organised by the Karachi Bar Association (KBA) on 12 April 2007 in Karachi in protest against the dismissal of Supreme Court president Iftikar Mohammed Chaudhry, said Reporters Without Borders, condemning the violence.

It was the third time that journalists have been targeted during demonstrations in support of Chaudhry, who was accused by the government of bias in his rulings on the disappearances of political activists.

"This situation is worrying," Reporters Without Borders said. "Journalists were among the first to condemn the supreme court president's removal. "This violence must stop, and those responsible should remember the primordial role played by journalists in condemning this attack on judicial independence."

Police beat Geo TV journalists inside the station's studios in Islamabad on 16 March because they had been airing footage of lawyers covered in blood from injuries they had received from police during a demonstration in support of Chaudhry (see IFEX alerts of 20 and 16 March 2007). Seven journalists were attacked by policemen and a lawyer linked to the Islamist party, Jamaat-e-Islami, during a similar demonstration the next day in Lahore.

During the 12 April protest, a man identifying himself as a lawyer beat a journalist after smashing one of the indicator lights of his car. Kashif Nizami, Irfan-ul-Haq, Tariq Aziz and Amer Singh were attacked and badly beaten by KBA members when they tried to express their discontent about the attacks they have been subjected to ever since they began covering these demonstrations.

Shakir Solangi of the KTN television station was beaten by a parliamentarian, Ghulam Murtuza Satti, after asking Satti to remain silent while he interviewed the president of the Pakistan People's Party, Makhdoom Amin Fahim.

The injuries sustained by the other journalists were minor.

Please email us with your complete details (CV, Name, contact number, City, News Company) at dailypakistan@yahoo.com to become a member.